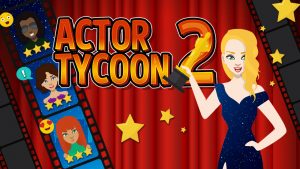 This year I published Actor Tycoon 2 for Android and felt like we’re missing good-old, classic Tycoon/Manager games. It’s a genre I personally love and is now, unfortunately, wrongfully put in the same basket of idle games. I will, however, mix and match them with “Manager” games as I find that the “entrepreneurial” spirit of both genres something that calls for the same audience.

It’s hard to find good tycoons, specially for mobile. It doesn’t help that they’re usually grouped either in “Sim” games (along with flight simulators, racing games, and other very different genres), or under “Strategy” (which are likely flooded by RTS and casual Clash of Clans clones).

Maybe I’m one of a few who really enjoy playing these sort of games on my device. They are not too heavy, but not too flimsy. They do not require heavy graphics. They can easily be played with one hand and don’t ask for fast reflexes. A perfect game to keep you occupied in your commute to work.

I’ll start the list with a game that barely made it here. The reason is that it borders the genres “management” and “clicker”, which are sometimes misunderstood. I’m not a fan of clicker games, but I see how some may find them enticing. That’s why I think it’s important to acknowledge at least one title. Kingdom of Procreation is a bizarre, addictive game, where you’re trying to marry various wives (or husbands) and have as many children as possible. Enough said. Check it out.

One of the better attempts at this genre on the Android market. Although far from perfect, this game is free and offers entertainment for a while. It does currently have some bugs that make it crash frequently, but hopefully developers will address the issue. It was a tough choice between this title and other music management simulators. However, the weakness I found in other sims were either the monetization models and/or their lack of investment in graphics. I do believe this game is missing some variety and small details as “publishing and album”, but it’s a good promise of the great tycoon games that are to come in the near future.

Although maybe not the truest form of Tycoon games, this board game adaption brings all the fun of city building without all the complex mechanics that may feel overwhelming on a mobile device. Suburbia’s simple set of rules lays out complex combinations that add an incredible depth and replayability.

Although very reminiscent of Motorsport Manager (from what I’ve heard, both developers actually worked closed together) and although I’m not an MMA fan, this game captures the spirit very faithfully. It is a good example of a well-balanced game despite its rudimentary graphics.

I was having a hard time deciding whether this game should make it on the list or not. But even if it’s only for its creative way of boiling down tycoon mechanics to a very simple concept that is perfectly fitted to the mobile environment, it deserves a spot on the list. The game brings a fun set of simple choices that truly make the player feel like they’re being part of a bigger picture – as if they were truly running a country. Choices have clear meaning and consequences.

Even though I’m not a great football fan myself, I’m always excited to try football managers. Unfortunately, I eventually get caught up in the cluttered interface, micromanaging things I couldn’t care less about. This is where mobile versions use the simplicity of their platform to their advantage. I like the simple graphics – makes it easy to read on a smaller screen. The game has been slimmed to the most vital nuts and bolt that make football managers fun.

Not the most conventional Tycoon game out there, but a manager nevertheless – it just happens that you’re managing a deadly virus. Simple, with extensive replayability, a controversial theme and easy-to-pick-up mechanics. It weird how you’ll find yourself frustrated for not having exterminated the entire human race.

I didn’t originally rate this game too highly, although I do admit it has great potential. The only determent on my part is the unappealing graphics and user interface. I would normally not support making a game more “commercial” on this site, however, it would greatly benefit from a revamp that could support its enticing and underlying gameplay. After all, it’s always more enjoyable playing a game with a UI that feels good on your fingers.

This game is funny, cute and yet still deep enough to be on this list. I do believe there is room for improvement, by generating more random super heroes and such. This game hits the perfect balance between a fun, commercial game, and a complex management game.

Probably the most ‘casual’ of this whole list, even though it broke with many of the casual conventions when it came out. Fallout Shelter seems to market to very different markets: Fallout fans (who are traditionally hardcore) and casual mobile players – and it does it with flying colors. Fallout brings back the dark humor of Fallout and adapts it into a simple manager with beautiful visuals. Above all, it uses the F2P model without being obnoxious. The lunch boxes are a great way of monetizing: truly making the player feel rewarded but not pressuring them during gameplay.

Although very reminiscent of Kairosoft’s Grand Prix Story, this game does have a charm of its own. The UI is slick, the gameplay is intuitive, the races are exciting and it has a good progression. One of my major positive arguments with this game is their monetization system. You pay a fixed amount from the start, and they never bother you again with micro transactions or advertising. For traditional gamers like myself, I do prefer this business model – it makes the game more enjoyable and I don’t regret paying for a good game. The price might initially be a bit steep, but you do get your money’s worth in the end.

I played the original Rebuild on Kongregate and fell in love with it. I was tired of the same old zombie games, and finally along came a game that mixed a genre I was fond of with a theme I really enjoyed. It did it with great balance and progression, long replayability and an easy to use interface. Each iteration of the game has proven to improve and expand on the previous version, which just shows how much the developers care about the game.

I could have filled half of this list with Kairosoft games, but I wanted to have a bit of variety. In the end I chose Game Dev Story for being sort of the “kickstarter” for Kairosoft in the western mobile market. It is a beautiful pixel-art game, very well balanced, with an original theme. Game Dev Story was, for me, the first mobile game ever to be addicted to. It proved to me that the seemingly shallow mobile environment could be different, that there was hope for great titles on mobile too, that we not only addressed to mass casual gamers, that there was a slot for hardcore gamers too.