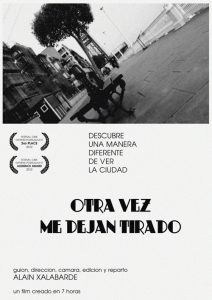 Shot and cut in less than 7 hours (in a 10-hour festival) with a one-man crew, ‘Stranded Once Again‘ became the festival’s favorite film, receiving both the Audience Award and 2nd Prize at the Festival de Zine Express de Portugalete.

Watch the full short film at the festival’s YouTube channel